He just responded now and asked for more information. Maybe the price will be cheaper. I will update you once I have definitive price from him.

I think once I have Opennebula working and built I will probably outlay the cost for this module as it is imperative to my business. I will let you know in a few weeks.
Any chance you can advise here NFS Datastore Only for VM Storage

as this is just about the final step in the dev testing before I start purchasing new servers specific to opennebula.

Just to let you know we are going ahead with the development of the WHMCS module. The dev said it will take between 25-39 working days to develop. I will update you once complete and working after we complete our testing.

No problem.
I am assuming the same API for Opennebula can be used for vOneCloud ?

I don’t use vOneCloud. I have private cluster on ESXi 6.5. I use clean Opennebula, but API the same

ok thanks. Do you see any benefit using Opennebula and not vOneCloud ? Also I am assuming Opennebula can be used with NSX and vSAN ?

Hmmm…that would do it

Thanks I think Ill ditch vOneCloud on that basis and use pure Opennebula.
Thanks again for your insight.

We are not using the guy you reccommended as he quoted $2000 then when we stated we required him to sign an agreement that we have exclusive use and he cannot sell the module or code…he then wanted more money because of this. In addition to this he did not know what was involved and this was another reason why the price increased from the initial quote of $2000. He stated that he looked at the docs and it would require another developer so he had no clue on what was involved and had never developed an Opennebula module before. So this means that we were going to pay for the build and he was going to sell it…We do not work with anyone that operates that way and never will.

In any event we now how someone that has already started the build and was happy to sign a commercial agreement…quote was far less and in less time. What these people do not realise is we would have given this guys thousands of dollars in more work as we have other provisioning module we need so it is a shame that he operated this way. I am sure he is capable however when it came to Opennebula he did not know what was involved.

Hello,
Any news about billing?

We would also be interested and would prefer to not reinvent the wheel by creating our own.

How is this project progressing?

Hello, we are using invoiceninja billing system. Invoiceninja is open source written in php (laravel) and have REST API. So we don’t need to create billing system from scratch, but just write “middleware” between OpenNebula and InvoiceNinja.

Is there serious interest? How much you can pay monthly for such connection?

I can write connector between OpenNebula and InvoiceNinja, so we don’t need to reinvent wheel, but just connect this two softwwares.

Hi all, I have done some work on OpenNebula to InvoiceNinja bridge. Look at screenshots. 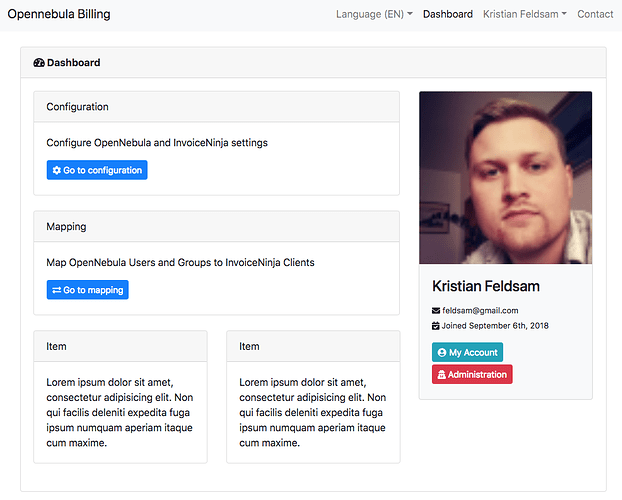 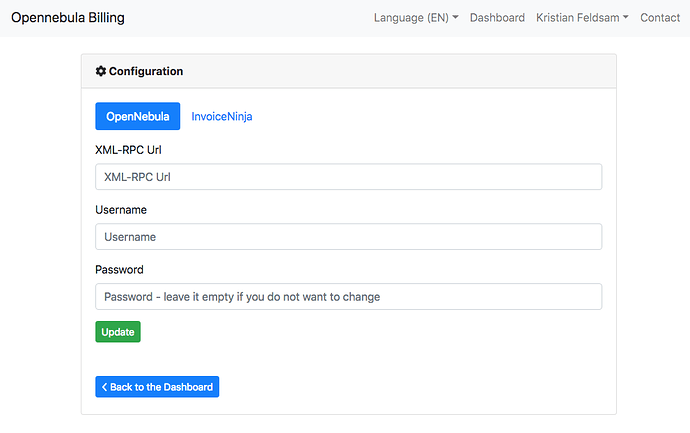 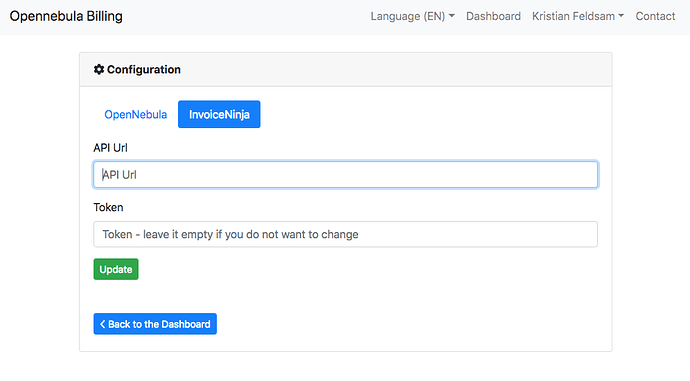 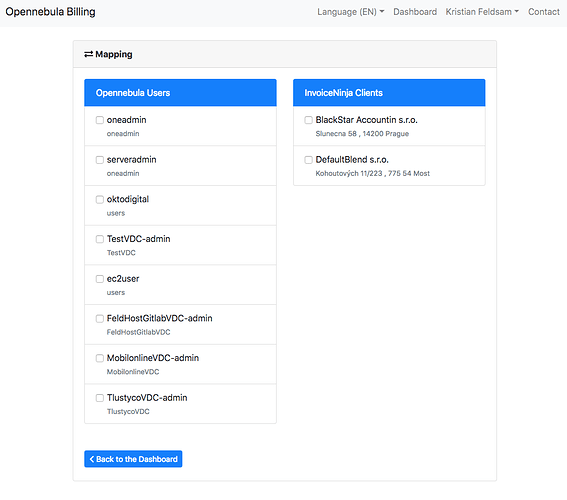 I’m afraid that complete billing solution for a IaaS provider is much more than just sending invoice. There can be prepaid and contract types of services, per-hour, per-day and per-month billing options, software leasing with different type of licenses (for example, per-core or per-user licenses), technical support and so on. Different customer can have different rates. Even with “raw” ON services I don’t know how to bill for different datastore types (SSD and HDD datastores, for ex.).

I’m in the process of evaluation possibilities and really would like to avoid coding our own solution but can’t find any alternatives yet. The best option is to use any “big” billing cloud services and just add\code a connector to ON but even here can’t find enough options.

At the same time even with own project there are some important questions on how to count different services. For example, how to count how many public IPs have been used by a customer? Even with the VMs itself I’ve seen situations when host is already down but VMs show as running.

We had the same issue with the developer from Fiverr. He wanted to have full access to our environment (WHMCS and ON) in order to develop the module.

Hence we cancelled the project and got refunded. Still I think A module which works with WHMCS as full front-end (only api calls) and no access to ONE would be our preferred solution.

This may be of interest as we have been working with them.

IONe is an open-source development kit for automation of cloud infrastructure based on OpenNebula.

I’ve just published an addon that could ease the VNC console integration with external billing solutions:

Hello, After playing with this for a while, I’ve finally decided to share with the community a service that provide tokens for the websocketproxy used by Sunstone to serve the VM console via noVNC. In the current OpenNebula implementation the VNC console is tightly linked to the Sunstone interface and it is the only way to access it due to the fact that only Sunstone generates the access tokens for the websocketproxy. The proposed addon, written as a Ruby’s Sinatra application provide a singl…

If I am not wrong this is the only piece of information missing from OpenNebula’s API?