Hi all!!
I’m following the guide
Quickstart: OpenNebula on Ubuntu 14.04 and KVM
http://docs.opennebula.org/4.6/design_and_installation/quick_starts/qs_ubuntu_kvm.html

I installed Ubuntu 14.04 on Virtualbox and installed opennebula

It works fine until I poweroff the ubuntu virtualmachine
after reboot when I try to enter sunstone via localhost:9869 sunstone doesn’t respond but in the VM command line everything seems working properly…
if I put
onehost list
I get the list of all hosts running properly
the same for all other commands…
Thank you for your help!!

I had the same problem on CentOS7 and KVM as hypervisor, the “device-mapper-libs” needed an update. After the update everything works.

according to step 1.3 of the guide I execute those commands with root privileges…it’s wrong?

another malfunction I noted is that if I login in sunstone without the “Keep me logged in” toggle, it loads successfully for a sec, and then it trows me out

What is ifconfig command output when you gain error in apt-get update command. 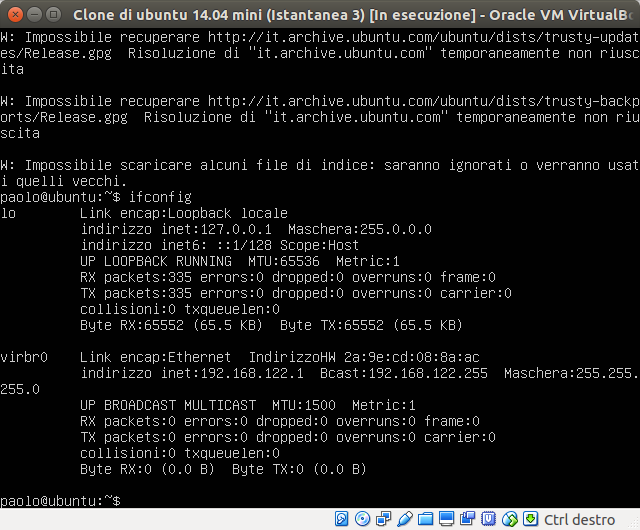 sorry for the screenshot but I am on virtualbox so I can’t copy&paste
Thanks for your help!!