OpenNebula 5 and VMs from Market

Hi! I have Opennebula 5.0.1 cluster with ceph datastore (image and system). I test cluster few weeks and found same problems.

This happens because by default ubuntu configures a serial console. Probably to be used with cloud-init.

In the images of the marketplace this configuration is deleted from /boot/grub/grub.cfg:

But not from /etc/default/grub.cfg. While we fix this you can apply the same sed command to both files.

I have just updated http://marketplace.opennebula.systems/appliance/575fcaa28fb81d438c000001
with that issue fixed

You’re right. The grub defaults are overwritten by the upgrade process. I’m working on a fix to be added to the context packages. Meanwhile you can add the file /etc/default/grub.d/99-opennebula-settings.cfg with this line:

With that file the upgrade process shouldn’t render the image unbootable.

Debian 8.4 image not get network. 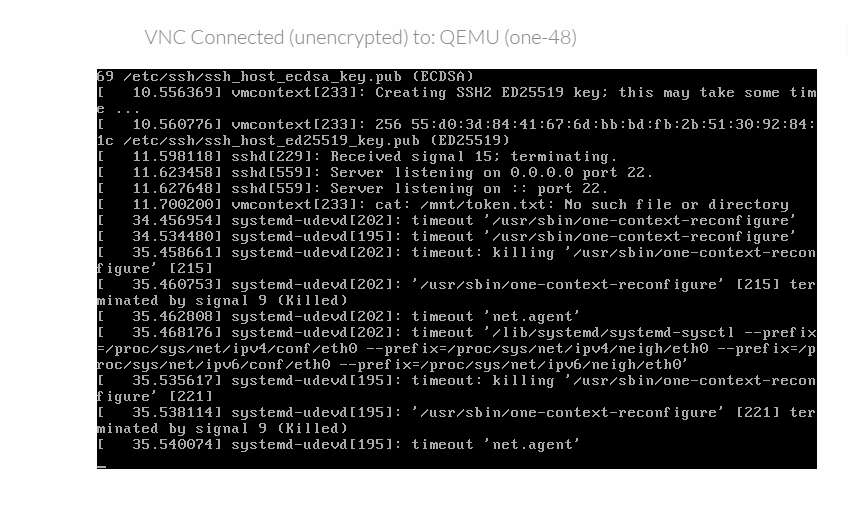 A new version of the image is uploaded that should fix that problem. We are not releasing new packages as we want to add more fixes.

New context packages with these fixes. The images will be recreated shortly.

Linux VM Contextualization. Contribute to OpenNebula/addon-context-linux development by creating an account on GitHub.