the default system and image storage is ceph and the hypervisors is ubuntu 18.04 .

After the upgrade vm ( apt update && apt dist-upgrade -y ) the os was stuck at booting from hard disk.
It’s so amazing that I haven’t any issue with Ubuntu 18.04 image at market place.
I don’t see any error log when the system is booting.

login to vm.
apt update && apt dist-upgrade -y
and then reboot the vm

I’m just getting this result when the os is booting

I realized that the only difference between the two versions (ubuntu 18.04 kvm and ubuntu 18.04 at market place ) are in their kernel.

Does anyone have any advice on which version is best to use in a production environment?

I have the same issue with marketplace 20.04 Minimal “No bootable disk”, while the 20.04 KVM works like a charm.
Edit: “No bootable disk” disappears after changing image driver from raw to qcow2 (my mistake), but then black screen (see below).

I hope this question will get some attention from the image builders.

Some details:
ONE 5.2
Black screen on VNC and SDL
CPU moves up to 100-180% for about 1 min then sticks at 0.0, infinite black screen from beginning an onwards.

Note:
It might not be very beneficial to spend much time fixing these Minimal 18 and 20 ONE images considering that they offer a 100+MB disk saving initially only.

But then, it will save much time to people to mark them as broken in the marketplace.

Unless there is a known easy fix of course.

After reading Ubuntu’s definition of Minimal, I suspect this stripped-down distribution is lacking too many packages to work with ONE.
The backup plan is to use the standard Ubuntu instead, which may explain why no-one has paid attention to our posts.

This said, getting a simple reply from ONE would be welcome: no clue on their position about Minimal is disorienting, and a broken image kept in the app market is misleading too.

Hi @kitasupport, thanks for the heads-up! We are looking into this

In the meantime, please use the standard Ubuntu virtual appliance from the Marketplace, if that one works fine for you.
Feel free also to report this as a formal issue via GitHub: https://github.com/OpenNebula/one/wiki/How-to-Report-Bugs-and-Make-Feature-Requests
Cheers!
Alberto.

For regular use, you should definitely use regular Ubuntu images.

Minimal images don’t come with support for virtual consoles, that’s why you’ll never see anything on VNC after GRUB loads the kernel. Because of that, any boot problems are hard to debug. Also, the change in Ubuntu kernels mentioned above introduces different behaviour in handling of virtual consoles - basically, failing if configured console is not available, while the distributed kernel simply ignores it. That’s why it doesn’t boot completely, it’s stuck on opening missing virtual console.

To fix such problems, it’s good to check the GRUB configuration of particular boot entry and update kernel parameters accordingly. In this case, dropping the console=tty1 would fix the problem. 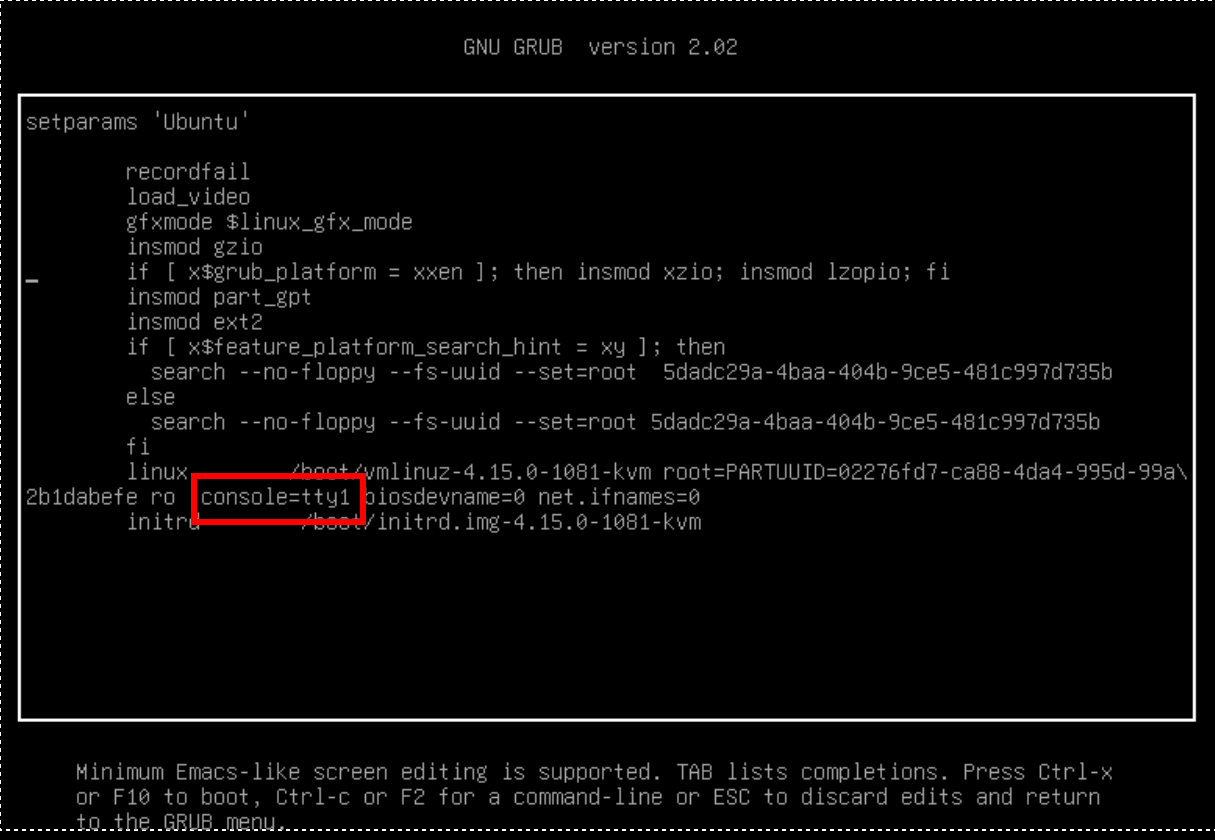 We’ll evalute a solution for the Marketplace image when doing a mass refresh of the images.

Thanks @vholer it’s cool to have a root cause. @amarti I won’t bother create an issue as frankly I can live with the standard Ubuntu. I would prefer the smallest working Ubuntu image for sure, it’s a nice optimization long term. But no idea how much work that takes to build something working from current Minimal image.
@vholer Definitely a good idea to tweak the marketplace image/template as users expect to find there well groomed servers working out of the box. Until then , a big WARNING in the image/template description would help.