I am trying to simplify my API experience (if possible) since I am not a developer. Software called “postman” is one of the ways to do it and I am wondering if there is a downloadable prepared object package for postman? Otherwise I have to write API calls and of course save them for later use, but if someone already did it I can just make an import into postman.

Or if somebody has any other suggestion besides postman…?

Hi Bojan,
I also use Postman for my developing tasks but unfortunately I haven’t used it with OpenNebula’s API so I can’t provide you any helping object

. What language are you using other than Java and Ruby?

That’s a good one.

I am not using any language since I am a network and data center engineer. Just this year I started to venture into cloud and software defined networking. The last time I used a programming language was some 15 years ago and that was not too advanced.
I wanted to use Postman to be able to make test API calls, check the format, check the results etc. without too much hassle. I have no develeper environment whatsoever.

OK, I will craft API calls manually. Fine. But do you have some examples? Going through documentation I was only able to find some bits and pieces, but not a single full example, not even for the simplest call (to get “onevm list” for instance).

Challenge accepted!
I’ll check if I can do a ‘onevm list’ using Postman give me some time though

what an attitude man, kudos…

Ok Bojan!, this is what I’ve tested so far.

Then I’ve clicked on Get methods and… every method listed in the docs are there automagically: http://docs.opennebula.org/5.2/integration/system_interfaces/api.html

So I’ve tried to get the info for a VM with ID = 1. I’ve selected the one.vm.info method which requires two parameters IN according to docs the session string (you can use the content of the /var/lib/one/.one/one_auth file) and the ID of the VM so you have to set those IN parameters in a JSON array in this example: [“oneadmin:opennebula”,1] oneadmin:opennebula is the content of the one_auth file. OK I click on send and it works! 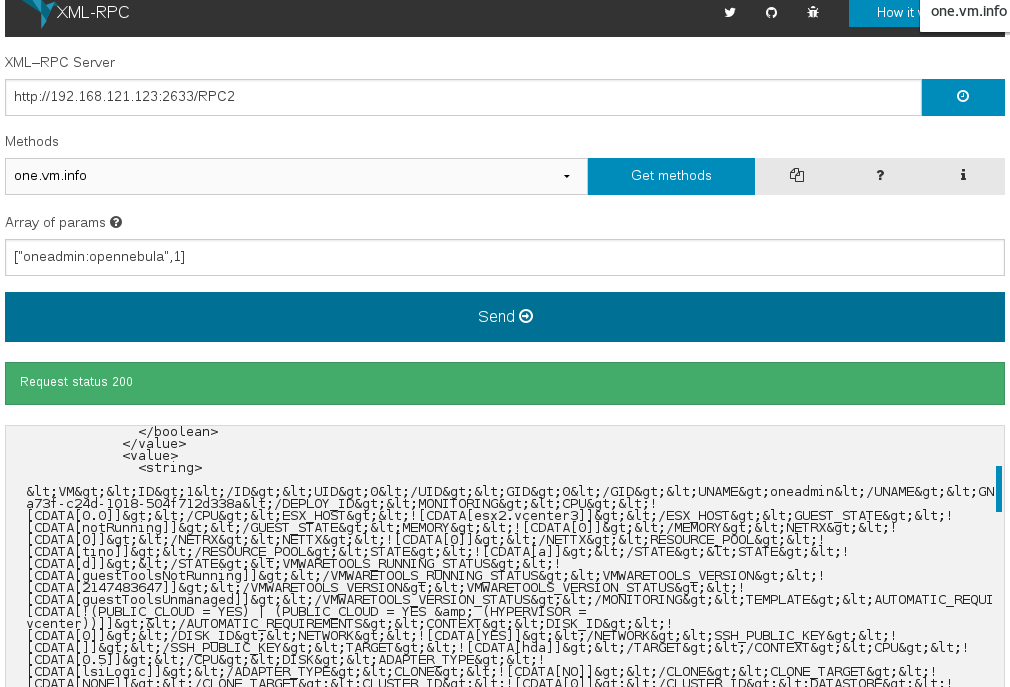 Al those CDATA and &lt and &gt are part of the xml response with comes as a string.

I’ve done the same thing with POSTMAN but it’s a little harder: 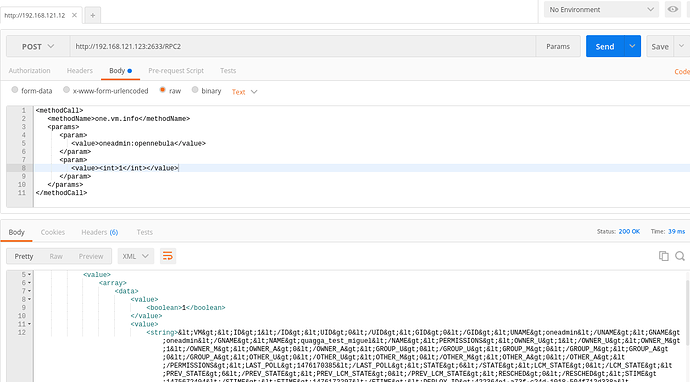 I’ve tried to run the one.vmpool.info which provides the onevm list… in XML-RPC client I’ve tried to use the following array [“oneadmin:opennebula”, -2,-1,-1,-1] according to the docs and I think it dumps all the info about VMs: 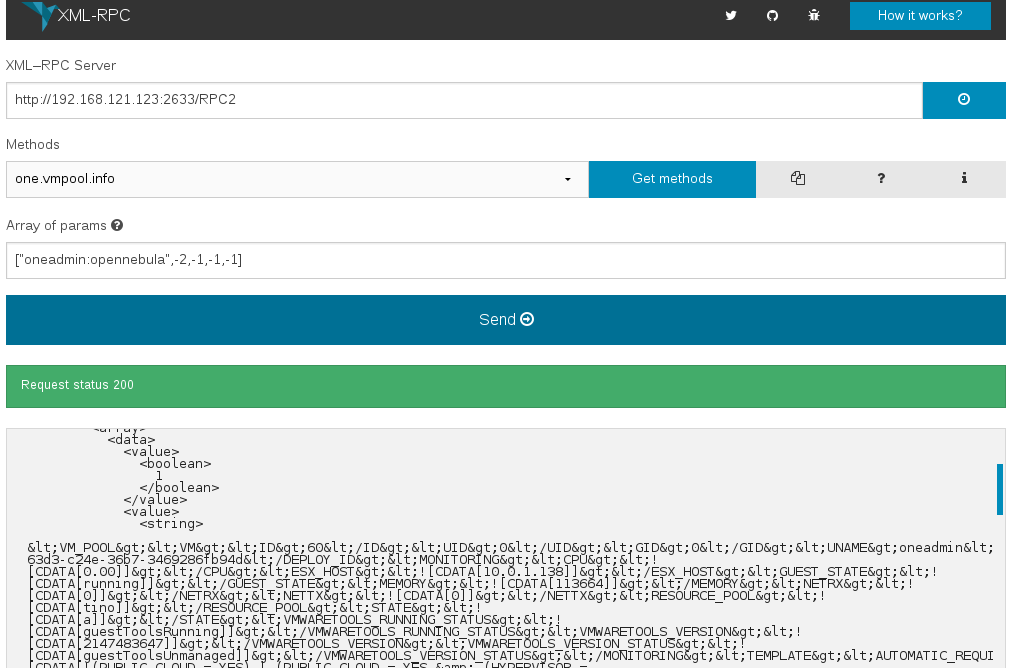 So next step would be how to parse all that data, so I guess now that a programming language would be helpful to parse the answer and all that stuff!

I’ve found this URL quite interesting to understand how I should prepare the POSTMAN parameters (http://xmlrpc.scripting.com/spec.html)

Thanks a lot for all of this. Based on your post I managed to get a hold on these tools and start working on my own.

What I find strange is the response format. To me it is really strange that it comes out just like a bulky bunch of data. This would mean that any software that talks through API should first implement an advanced parsing scheme. I am not a developer, maybe this is the norm but…??

I hope someone from OpenNebula will comment on this.

One more thing. Besides chrome xml-rpc client I have found an add-on for firefox. It is “RESTClient” which you can use in the same way.
Also, that chrome extension has a nice feature “get methods” which other solutions do not have. I managed to get the same result with this POST request:

You’re welcome!
and it’s nice to have more tools like the one you’ve mentioned in Firefox. I’ll have a look on how to parse the response as soon as I can.