I’ve followed the doc https://docs.opennebula.org/5.4/operation/vm_setup/vcenter.html#vcenter-one-context to make a VM template for Windows Server 2016. Is the order really correct? It says:

Shouldn’t the sysprep be runned at the last step with generalize and shutdown? Otherwise the VM is not generalized after step 4.

Also I’m wondering if the sysprep would be run with a unattend file so that regional settings and the initial admin password is set, even if that can be set to something else through the context part/attribute? 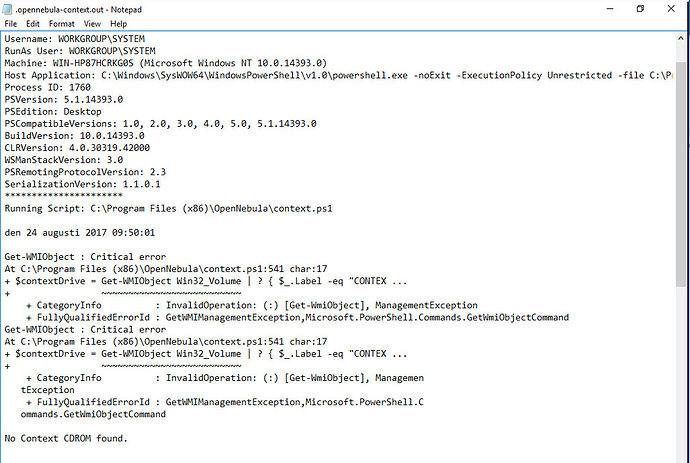 This is the error I get if I start a new VM.
Update: If I run the script manually in PS it says “No Context CDROM found”

You are right, sysprep must be executed after VMware tools are installed. We will change the documentation accordingly.

You can add an unattend.xml file to automatically configure windows. For password this can be done using contextualization. You can find the list of options here:

There may be two problems there:

Check in the VM template, Context tab, that the checkbox “Add Network contextualization” is enabled

Thanks. The VM template has VM tools installed and OK. I’ve removed the NIC from the VM prior to converting it to a template (saw that in some forum thread). This is how the template looks like in OpenNebula. Hope that is correct?
I’ve also added an unattend file to the sysprep command to hide eula and set input localization and such. 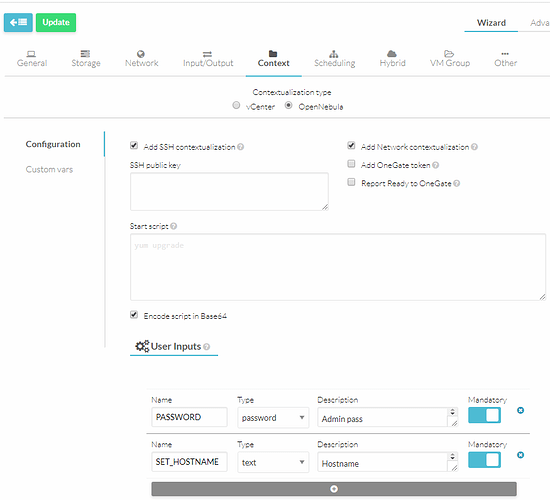 Any other suggestions on what could cause this?

No. It’s the first time I see that problem. Maybe someone with more Windows scripting expertise can jump in.

Ok, but as far as you can see I’ve done what’s necessary to get it going? Is it some security setting in the OS that needs to be modified maybe?

Where is the context attributes put on the VM? Does it attach an cdrom image? I can, in some cases, get it to run OK when i manually start context.ps1. And if that runs OK there’s a context.sh file created in the c: root with the attributes I’ve entered.
I can’t figure out when it works and not though. But it always fail during automatic start (which is done from the opennebula service I think?)

On KVM, it’s taken from the ISO image named CONTEXT. On VMware, vmtools and channel between the hypervisor are used. Can you please try to start the service manually on booted system (so we know if it’s related to the boot process, e.g. a dependency issue, or problem with the service itself)

and check the c:\.opennebula-context.out, if the failure is still there.

Unfortunately, I’m not able to reproduce the problem on clean W2k16. 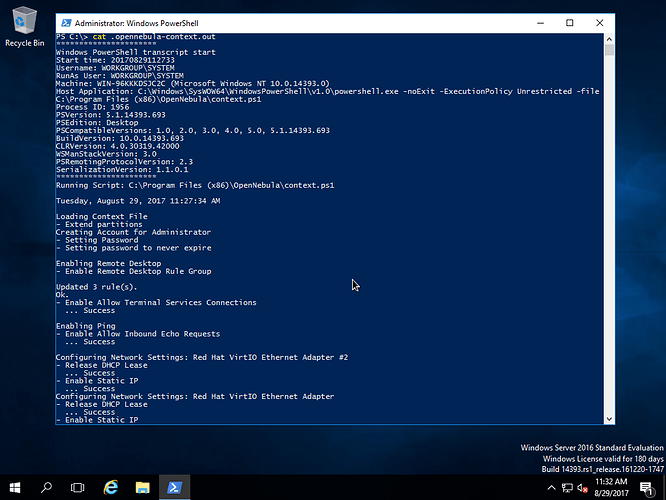 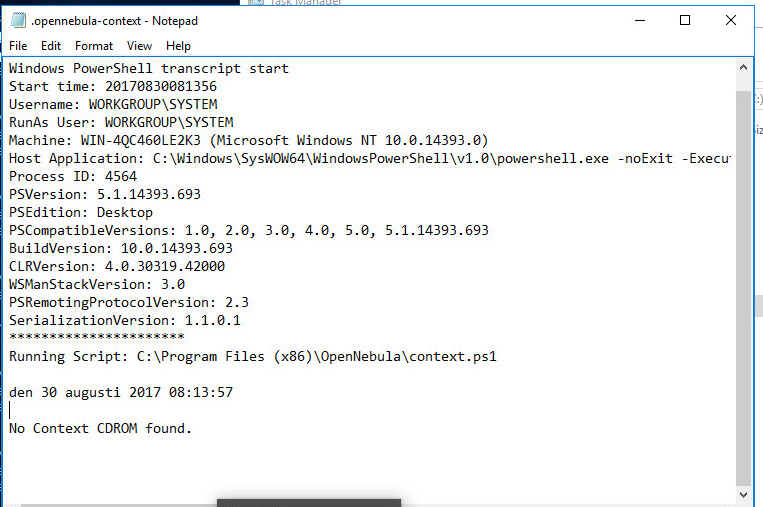 One thing I noticed though. If I check the log after normal boot it looks like this: 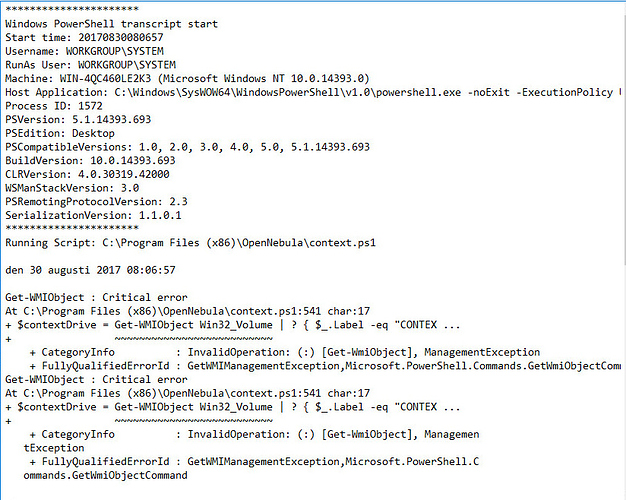 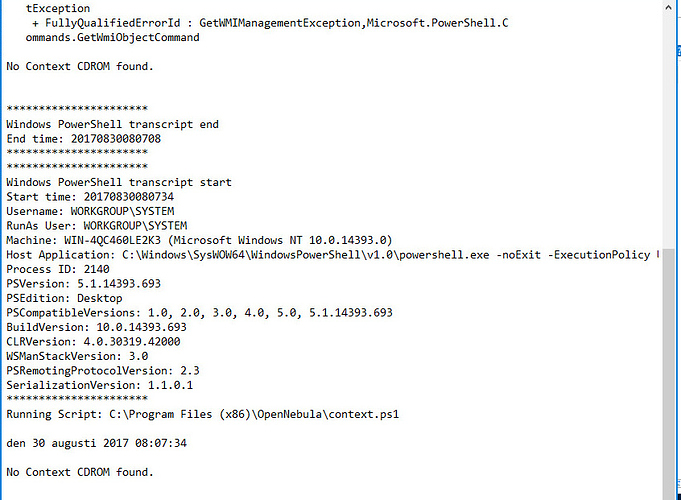 Also I can’t delete the logfile because PS is still running (I’ve let it run for an extended time but it never stops).

But when I run the context.ps1 script manually it runs OK

So it looks like it doesn’t work only during the boot process. I guess the WMI isn’t started yet, so I would try to add a service dependency on WMI. If you want, you can try one-context-5.4.0.1.msi to check if it behaves. The changes against GitHub - OpenNebula/addon-context-windows: Windows VM Contextualization are following:

Unfortunally the same problem exist. I’ve also tested it on a Win2012R2 template but the same problem occurs. Again, if I run it manually in a PS shell it works as expected. Is there a “flag” that tells the service that it’s already runned once ?

I saw something interesting right now actually. I looked at the params of the context service and the path is:
C:\Windows\SysWOW64\WindowsPowerShell\V1.0\powershell.exe " and the file context.ps1. If i run this in a cmd prompt it says “No context CDROM found”. If I run the ps1 file in PS shell it works.

We test the W2012r2 and it’s fine for us as well. Unfortunately, I still can’t reproduce the problem. The best would be if you can provide the image so I can look on it. If it’s possible, I’ll send you the Dropbox file request in private message.

Is there a “flag” that tells the service that it’s already runned once ?

Currently, the PS script is started with -noExit, so after contextualization is done, the whole service leaves in fake running state.

I’ll prepare a fix tomorrow and provide MSI so you can validate a fix.

Ok, sounds great. Thanks! Looking forward to try it out

This package should fix the problem with the service one-context-5.4.0.4.msi (26 KB). I had some problem with upgrading the package, had to first uninstall the old one.

Great, it works now! Thanks for input/fix.

My problem is:
I did what you mentioned:(on Windows Server 2008R2)

and there is no such file c:\.opennebula-context.out in my vm. I checked the status of opennebula context service. it says it is on.